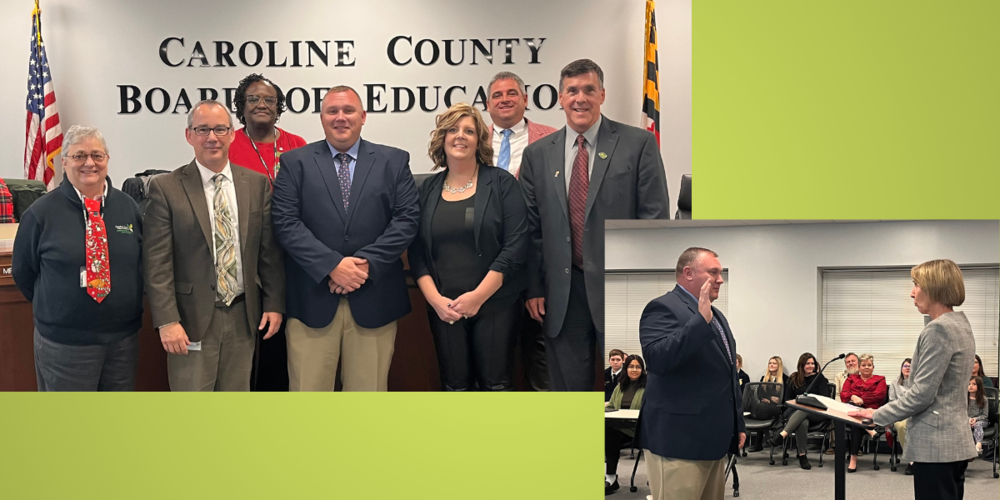 Troy Plutschak Welcomed to the Board; New Officers Elected

Troy Plutschak was sworn in as the newest member of the Caroline County Board of Education at the December meeting. He fills the vacancy left by long-serving member James A. Newcomb, Jr., whose term ended in November.

After being sworn in by Caroline County Clerk of the Court Terry Lord, Mr. Plutschak was welcomed by fellow board members Richard P. Barton, Mark R. Jones, Donna L. DiGiacomo and A. Michele Wayman, and Superintendent Derek L. Simmons.

Mr. Plutschak is a lifelong resident of Caroline County. He was born and raised in Preston, and is a 2003 graduate of Colonel Richardson High School. In 2005, Mr. Plutschak began a career with  the Caroline County Department of Emergency Services in the Communications Division where he is currently a Shift Lieutenant. He has extensive volunteer experience with both youth sports and with the Preston Volunteer Fire Company as Fire Chief. Mr. Plutschak and his wife Heidi live in Preston with their daughter Avery who is a student at Colonel Richardson Middle School.

Also at the December meeting, the Board conducted their annual reorganization of the board. They unanimously elected Richard P. Barton to serve as president and Mark R. Jones to serve as vice-president.

Mr. Barton was elected to the Board of Education in 2020 for a four year term. He is currently the Chief Executive Officer of the International Critical Incident Stress Foundation, Inc. (ICISF), which is an educational foundation that serves the mission of improving the lives of people who face the stress of critical incidents. (complete biography).

Mr. Jones was appointed to complete a four year term that began in 2020. He is the business owner of a grain farming operation that spans Caroline, Talbot, and Kent Counties (complete biography).

The Board of Education provides leadership and oversight for the Caroline County Public Schools by setting goals, establishing policies, and committing resources to benefit students. The Board is comprised of three elected members, two members appointed by the governor, and two non-voting student members (one from each high school). The Board generally meets the first Tuesday of every month and holds a work session on the third Tuesday of most months. Further information, including a meeting schedule, may be found on the Leadership page of the CCPS website.